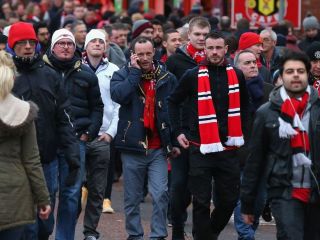 Manchester United ‘fully supports’ plans to complete the Premier League, the FA Cup and the Europa League competition amid the disruption caused by the coronavirus pandemic.

The Red Devils are said to be willing to make refunds for season ticket holders if the campaign is cancelled.

“The club fully supports the collective intent to complete the Premier League, FA Cup and the UEFA club competitions,” United said in an official statement.

“However, if it were decided that games cannot be played, or needed to be played behind closed doors, Manchester United confirms it will offer season ticket holders either a pro-rata rebate against their season tickets for next year, or a pro-rata cash refund based on the number of games still to be played.”

The Premier League has had to suspend all its matches until April 30 at the earliest, but no-one is convinced that football will be back by then.

While we have all joked about Liverpool missing out on winning their first title in 30-years, and I get why it would be funny, but I’m not certain ending the season now is in United’s best interest either.

Ole Gunnar Solskjaer’s side were starting to build momentum — 11 games unbeaten in all competitions — and no Champions League football will be a huge blow again.

It would be great to see a shadow cast on Liverpool’s brilliant season, but at our own expense not so much…

Solskjaer’s plan for United requires Champions League football. He’s made some great signings and with a place in Europe’s competition, the Norwegian will be able to attract players that are at their peak and among the best in world football.

Jadon Sancho could be a future star at Old Trafford. I’ve maintained all year that we’d get him no problem as long as we qualified for the Champions League.