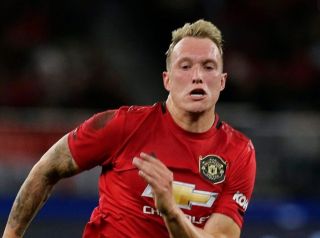 The former international gave an interview to Football Insider and claimed that Jones “still has a lot to give” despite falling out of love at Old Trafford.

According to The Mirror, Newcastle boss Steve Bruce is keen for the defender to join his squad.

Jones has made just eight appearances this season despite being handed a new contract last year. Heads were scratched when he got that deal and the club’s thinking during that time should be criticised.

And it’s important to note that none of this is personal. Football fans on Twitter don’t get that and constructive criticism quickly gets out of hand.

Robinson recalled his time playing with the centre-back between 2009 and 2011 whilst they were teammates at Blackburn Rovers.

“He has had a difficult time with injuries. He has not played a lot of football this season.

“I played with him at Blackburn and he was a fantastic young centre-half who could also play in centre-midfield, holding midfield.

“It depends when the window opens but I think he is in a vulnerable position at Old Trafford. He still has a lot to give. He has been at Manchester United for a long time but is still a good age. Anybody who has been at a club that length of time, it is worth a change.

“There is still a lot more for him to give. Playing without the pressure of Manchester United may kick him on for the latter part of his career.”

EURO 2020 being postponed until the summer of 2021 may see Jones set a fresh objective for himself. Gareth Southgate preferred him to Chris Smalling in the past but now he’s completely out of the international picture.

A move to Newcastle could see him get regular games in the Premier League again.