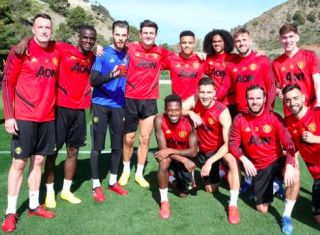 The postponement of this summer’s European Championships due to played across the continent is depressing news for all football fans.

Coronavirus has completely torn up the football calendar and a large amount of uncertainty still remains as to when games will eventually return.

But some players can take positives from having another opportunity to work their way into their national manager’s plans for next summer’s rescheduled tournament.

Gareth Southgate would have already made most of the key selection decisions for his England squad, but another season gives players a fresh chance to impress the Three Lions boss.

READ MORE: Erling Haaland’s key concern over Solskjaer that made him turn down Man United transfer

Manchester United have several players that are striving for a place in the England team.

Luke Shaw has enjoyed a fantastic resurgence of form in the past few months and would have been confident that he had done enough to cement his place in the squad.

But Southgate’s current first-choice left-back remains Leicester City’s Ben Chilwell, who had endured a dip in form before the season had halted.

Another campaign gives a reinvigorated Shaw the chance to stake his claim for a starting place in Southgate’s exciting young side.

On-loan goalkeeper Dean Henderson was being tipped by many to be England’s number one this summer as a result of some stunning performances for Sheffield United.

However, Henderson may have still missed out on a place in the starting XI to Everton ‘keeper Jordan Pickford.

In truth, the 23-year-old couldn’t have done much more to displace his counterpart. Henderson has another chance to shine next season, but there is uncertainty over where his future lies.

Henderson will only benefit from a postponed Euros if he plays regular first-team football rather than deputising for David De Gea at Old Trafford.

This summer’s Euro’s would have come too soon for Mason Greenwood. The 18-year-old is a generational talent and has a bright future for his country having already featured for the u21.

But Greenwood has had limited game time under Ole Gunnar Solskjaer this season, despite still being able to show his extraordinary scoring talents with 12 goals in all competitions. Perhaps further game time next season would make Greenwood a talent that is impossible to ignore.