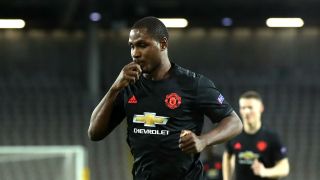 Manchester United will reportedly hold talks with Shanghai Shenhua in order to extend the temporary contract of Odion Ighalo for another 30 days.

The Nigeria international made a great impression in his short spell at the club — but his spell at Old Trafford has been interrupted by the coronavirus, which sees the Premier League suspended until the end of April at least.

Ighalo has come in as backup striker to Anthony Martial. Not only does he score goals, he brings a degree of happiness to the table and the mood at United was good before games were suspended. Ole Gunnar Solskjaer’s side are still on an 11-game unbeaten run.

Martial appeared to kick on following Ighalo’s arrival as if he knew his time to take responsibility at United was running out. He reacted brilliantly and it meant Solskjaer had more options to select from up front.

According to Sky Sports, Ighalo’s loan deal with United expires on May 31 but the club will try to keep him until Junes 30 amid the ongoing shutdown due to the COVID-19 pandemic.

United have the option to sign Ighalo on a permanent basis following his temporary deal, although Shenhua will demand a suitable fee for their striker. It has previously been reported that they may want as much as £15m (via Daily Mail) for his signature.