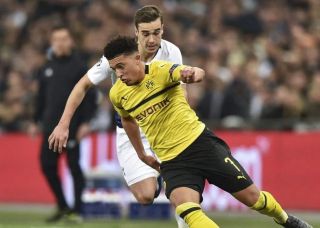 There’s some promising news on the Jadon Sancho front.

Manchester United are said to be leading the race for the Borussia Dortmund winger, according to the Evening Standard, with figures at the Bundesliga club increasingly believing he is on his way to Old Trafford.

The England international is reported as a primary target for Ole Gunnar Solskjaer this summer and United look set to make him the most expensive player in their history.

READ MORE: Ferran Torres: The £50m winger Man Utd and Liverpool are set to battle over

Dortmund are expected to demand upwards of £100m for his signature, and there has been a growing acceptance this season that Sancho will move on in the coming months.

Although the likes of Chelsea and Liverpool have been linked with Sancho as well as United, I can’t see either of our Premier League rivals meeting Dortmund and the player’s demands.

The Red Devils have the financial power to do so.

Some at Dortmund are still expecting an approach from Liverpool but it sounds like United are making progress on a deal.

A marquee signing who could become a superstar at Old Trafford.