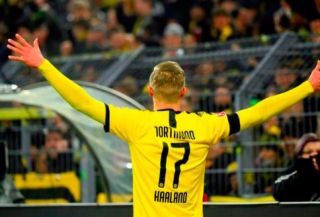 A new reason has emerged as to why Erling Haaland turned down a January transfer to Manchester United.

The 19-year-old goal machine moved from Austrian side RB Salzburg to Borussia Dortmund, and he has continued his remarkable form in front of goal in Germany.

But Haaland’s move to the Bundesliga came as a surprise to many United fans, who believed he was destined for Old Trafford.

United needed a goalscorer after Romelu Lukaku was not replaced in the summer and Haaland seemed to fit the criteria perfectly.

The Norwegian starlet had a connection to Ole Gunnar Solskjaer from their time at Molde, and the United manager had praised him in several press conferences.

But instead of moving to Old Trafford, Dortmund was seen as the perfect destination for the next stepping stone in his fledging career.

READ MORE: Report: Figures at Borussia Dortmund believe Sancho is on his way to Manchester United

And Haaland’s father Alf-Inge has provided some interesting information that made Haaland ultimately choose a move to Germany.

“You never know how it would go in other clubs,” he told TV2, as quoted by Manchester Evening News.

“It may well have been good, too, if we had chosen a different route. We’ll never get an answer to that. But we are very happy with the clubs he has been in.

“You have to go to a club where the whole club wants you, not just the coach. I think that’s the most important thing, in addition to how the club has been over the last five or ten years and what direction they’ve taken.

“Because it’s dangerous to just sign for a coach, because he can suddenly be sacked.”

This implies that Solskjaer was a huge admirer of Haaland but his approval may not have been shared by others at Old Trafford. The fact that Mino Raiola is his agent may have been a factor with the club not interested in dealing with such a disruptive figure.

But rather than having concerns over Solskjaer’s credentials as coach, it appears the key worry was whether United would back the Norwegian’s long-term rebuild at the club.

United still require a prolific striker this summer to provide competition in attack.