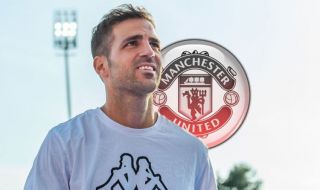 Cesc Fabregas was wanted by Manchester United when he left Barcelona in 2014.

The former Arsenal captain has revealed a conversation with José Mourinho convinced him to reject a move to United and join Chelsea.

After coming through the academy at La Masia, Fabregas rejoined boyhood club Barcelona in 2011 but opted to return to the Premier League just three years later.

Fabregas eventually joined Chelsea and has noted that Manchester United and Manchester City were both interested in him at the time.

The Gunners had first refusal on the midfielder due to a clause inserted in the deal which saw him return to Barcelona, but he never got an answer from Arsene Wenger and decided he couldn’t wait forever.

A conversation with Mourinho saw him return to London, a city he calls his home.

“Once I decided to leave (Barcelona), Arsenal will have the first option of any other club and I cannot speak to any other club for one week to see if Arsenal want me or not,” he told Arseblog podcast Arsecast.

“Arsene didn’t give me an answer, we just had to wait one full week to see if they responded. Definitely this was my first option, in my mind I’m telling everyone I’m going to Arsenal — this is what I want.

“Arsene can see this. I didn’t want to be a beggar, they know the situation, in one week they haven’t said anything, straight away I knew they probably didn’t want me back. They waited the full week without giving me a response.

“After the week I had to take my chance, I had Manchester City, United and then I spoke to Mourinho — which I didn’t think would ever happen.

“To be honest, after I left the room with Mourinho I said, ‘that’s it, I don’t need to talk to anyone else, I’m going to Chelsea.’ What he told me, the team he wanted to make, what he thought of me, how he wanted me to play, this is what I wanted.

“On top of that it’s London and not Manchester, London was my home.”

Fabregas would have been a good signing in 2014 — as would have Toni Kroos and Thiago Alcantara. The best David Moyes could get was Marouane Fellaini from his former club Everton.

But to Fellaini’s credit, he wasn’t a total inconvenience. He did his job but it always felt that United played too direct when he was on the pitch.

A useful tool but one Ole Gunnar Solskjaer was right to move on last year.

As for Fabregas, he’s currently at AS Monaco.