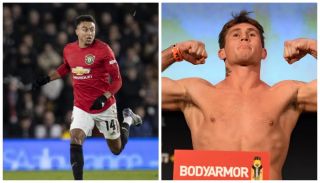 With everyone in lockdown after the outbreak of COVID-19, the Premier League has been suspended until April 30 at least, but it’s more a case of being put on hold until further notice as the coronavirus pandemic worsens.

The UFC is another major sporting organisation that has pulled the plug and it seems as though boredom is setting in.

A growing trend on social media has seen users around the world attempt kick-ups with toilet roll — making fun of people stockpiling the product despite being told not to!

Lingard posted a video of himself attempting an overhead kick with toilet roll, before editing the clip to make it look like it bounced off several walls before dropping into his washing basket.

Why did this upset Till so much? Well he’s a Liverpool fan and they never stop complaining.

Jesse lingard posted a video kicking a bog roll all round the house saying ‘’ haters will say it’s fake ‘’ well let us the haters comment on the video to spread out hate instead of limiting comments on your post, shitbag tactics they are.

The UFC middleweight took to Twitter and wrote: “Jesse Lingard posted a video kicking a bog roll all round the house saying ‘haters will say it’s fake’ well let us the haters comment on the video to spread out hate instead of limiting comments on your post, s****** tactics they are.”

This sort of message should be shut down immediately.

We only need to cast our minds back a month to recall Caroline Flack’s death by suicide.

This put the impact of online abuse on mental health in sharp focus.

So, what does Till think he will achieve by commenting negativity under Lingard’s posts?