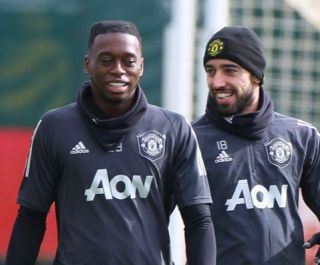 Bruno Fernandes has brought an elite mentality to Manchester United.

A boost in performance levels of several first-team in the short time Fernandes has been at Old Trafford is no coincidence.

The Portugal midfielder is a winner, and is constantly demanding the best from his teammates.

You can see the leadership qualities that Fernandes brings to Solskjaer’s side on the pitch, as he is always looking to get on the ball, conducting play and directing teammates as to where they should be.

But it has also become apparent that the midfielder is having a positive influence on the training field.  According to the Metro, Fernandes was handing advice to full-back Aaron Wan-Bissaka as early as his first full training session.

Fernandes was believed to be giving tips to Wan-Bissaka on how to get more out of his game in an attacking sense.

Wan-Bissaka is exemplary defensively, but if there is one criticism of his game it is his productivity going forward.

As the main outlet down the right-flank, it’s important Wan-Bissaka plays the role of a second winger as well as a defender in what is currently quite an imbalanced system under Solskjaer.

Fernandes knew how important it was for Wan-Bissaka to improve his form in attack. And since the playmaker has come in, we have certainly noticed a difference in the full-back.

While he has not been necessarily delivering bucket loads of assists, Wan-Bissaka seems to have far greater confidence going forward and is less reluctant to reach the byline where he can deliver a dangerous cross.

It’s so encouraging to see Fernandes’ desire to improve rub off on his fellow United teammates.