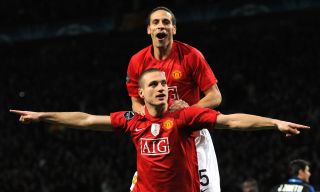 Rio Ferdinand was made pick out who he rates higher, a prime Nemanja Matic or a prime Virgil van Dijk at Liverpool right now.

The question was put to him by a fan in a recent Q&A session he held on Instagram, and it should come as no surprise who he selected.

Ferdinand was keen to stress that he rates Van Dijk given the influence he is having on Liverpool, winning the Champions League last season, but he couldn’t look past his former partner in defence.

READ MORE: Football – and Man Utd – so irrelevant but yet so relevant in unprecedented times

United had the best centre-back pairing in Europe when Ferdinand was joined by Vidic at centre-back. They have league titles and a Champions League winners’ medal to show for it.

“Prime Van Dijk or prime Vidic? [It’s a] good question,” he is quoted as saying via the Daily Mail. “I’ve got to go with Vidic because he was my partner, man. He was my partner. He covered my back and I covered his. That was it.”

“I love Van Dijk, don’t get me wrong,” he added. “I love him. [I think he’s the] best defender in the world now, definitely. I’d love to have seen him play in our time, seen what he was about. That would have been interested. [He’s a] top player.”

Football has changed a lot since the days of Ferdinand and Vidic in United’s defence. Manchester United are not the same force on the pitch — ever since Sir Alex Ferguson called time on his managerial career to retire.

Vidic and Van Dijk are two very different defenders and if I had to pick one of them to partner Ferdinand, it’s obviously going to be the Serb, no matter how much Liverpool fans try to argue otherwise.