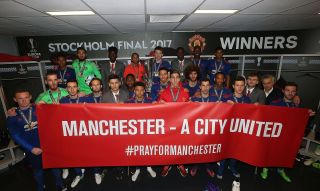 On 22 May 2017, an event on Manchester United’s doorstep rocked the world and plunged a city into mourning. 22 people – most of them teenagers and young people – were killed in a suicide bomb attack at the Arena. 24 hours later, Manchester United – the symbolic figurehead of a football mad city – played a game where 22 men kicked a bag of air around a field.

Football seemed so irrelevant in the wake of the tragic loss of those young lives, but yet – at the same time – so vitally important and never more relevant – to so many. Here was a chance to lift a grief-stricken city out of its state of mourning, even if only temporarily, and restore the first tentative stirrings of hope.

Certainly not for the last time, football brought everyone together in a way only the beautiful game can. United’s Europa League win that night gave Manchester a candle to light, a pathway out of the darkness, a small sliver of celebration where there appeared to be none. A city, indeed, united. Manchester United inspiring the world again. As United lifted their first ever Europa League title high into the Stockholm sky, it began Manchester’s gradual healing process.

Feast, famine, war, terrorism, divisive politics, drought, and Mother Nature – no matter what the world tries to throw at us, we’ll always have football. The one constant in an ever-changing, forever evolving world. The one pastime where we can forget the stresses and strains of modern-day life and emerge ourselves in the drama of those 22 men chasing an inflated pig’s bladder round a field. A release, a way of life, more than simply just a game. For many, their entire lives revolve around those 90 minutes and in, turn, the gamut of emotions they bring – from hope to joy to despair and everything in between.

There’s no better feeling that cheering your side on with your mates, whether that be in person at the stadium, in your garden, living room, pub or bar. In times of trouble, we turn to the beautiful game for comfort, warmth and familiarity. As Pope John Paul II once said, as quoted in David Hepworth’s book Nothing is Real: The Beatles Were Underrated And Other Sweeping Statements About Pop: “Of all the unimportant things, football is the most important.”

As the world battles against the worst global crisis many of us have ever seen, football again seems so insignificant, particularly when you take one look at the horrific numbers coming out of countries like Italy. People are dying here. For the first time in most of our memories, world sport has shut down completely as COVID-19 takes its deadly hold.

It really does put the words of one of the greatest managers of his era into stark perspective. It’s not important, but it is.Since football stopped, Manchester United should have played three games. In an ideal world, we’d be in fourth place in the league, in the quarter finals of one cup and the semis of another. Yet we don’t even have the escapism of a football match to distract ourselves from the most difficult and most unprecedented times of our lives. Nothing to take our minds off this pandemic that’s threatening to wipe out the world. Unlike that terrible night at the Arena almost three years on, there’s no light at the end of the tunnel. Scott McTominay’ derby day clincher was only two weeks ago, but it feels like an eternity. It feels like the last time that life itself resembled any semblance of normality.

As the old adage goes, absence makes the heart grow fonder. That will certainly be the case when football returns in the distant, post-coronavirus times. Whenever that may be. It will only serve to rekindle the love we all feel with our football club. Stay safe, stick together, look after each other and we’ll get through this. Sorry Bill Shankly, on this one occasion you were wrong – football isn’t a matter of life and death.