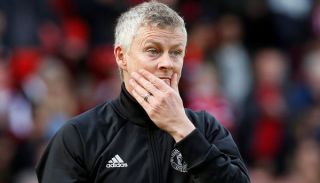 Manchester United are heading in the right direction under Ole Gunnar Solskjaer.  The Reds are unbeaten in 11, fighting on three fronts, and have a crucial transfer window coming up.

The summer window is imperative for United in accelerating the long-term rebuild under Solskjaer as they look to close the gap on bitter rivals Manchester City and Liverpool.

Solskjaer needs to prioritise attacking quality when identifying targets, with a natural right-winger and a prolific striker top of the list.

As we have come to expect with United, the club have been linked with dozens of elite players already that have potential to fit the United manager’s criteria.

But one attacker definitely returning to Old Trafford is forgotten man  Alexis Sanchez.

As reported by the Express, Inter Milan have no interest in signing the Chilean international after a poor loan spell in Italy.

Sanchez has once again been troubled by injuries and has managed just two Serie A starts this term.

And Solskjaer could be about to suffer from the biggest mistake of Jose Mourinho’s Old Trafford reign.

The United boss has a dilemma over what to do with the deteriorating 31-year-0ld. But, in truth, there is hardly a multitude of options when deciding upon his future.

Solskjaer is building a young, exciting squad characterised by youth, pace and flair. Sanchez, meanwhile, is the antithesis of what he would look for in a new signing.

And it’s not as if there are plenty of clubs queuing up to sign a player who has barely played any minutes in the last two seasons.

According to Goal, Sanchez earns up to an absurd £500,000 per-week at Old Trafford with bonuses included, probably making him the highest paid player in the Premier League.

Amid the coronavirus financial crisis, there is likely to be huge uncertainty going into the transfer market. Therefore, no club in their right mind would consider offering to sign Sanchez on even a fraction of his current wages.

Inevitably, Solskjaer will be stuck with the declining Sanchez, and this could hinder United’s transfer business summer because of the precedent his salary sets and the proportion of the wage bill he takes up.

ESPN claim United are hoping for a summer of world class signings, but they may be forced to give their own outcast yet another chance instead of a new emerging talent.