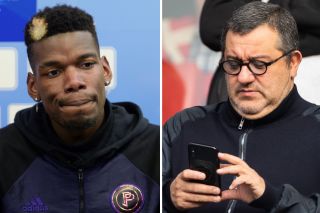 Manchester United executive vice-chairman Ed Woodward has reportedly re-opened talks with Paul Pogba’s agent in a bid to sort out the midfielder’s future.

The Frenchman has made just eight appearances for the Red Devils this term and speculation about transfers to Juventus and Real Madrid are non-stop.

It doesn’t help having a key player at a club distracted all of the time — and Raiola has done anything but attempt to kill the stories.

Pogba looked one of the best players in the world during his time in Serie A, so we can see why he’d go back to Juventus.

But according to the Daily Mirror, Woodward and Raiola are now in talks trying to resolve the situation as rumours continue to hit the gossip columns.

The report adds that both Woodward and Pogba have asked Raiola to be less confrontational and tone down on criticisms of United when he speaks to the press.

This is the first time we’ve heard Pogba intervene by asking his agent to pipe down. And it’s probably too late as the damage has been done.

Moreover, Raiola is renowned for being outspoken, and he doesn’t have to listen to Pogba.

It will be interesting to see if anything comes of this.