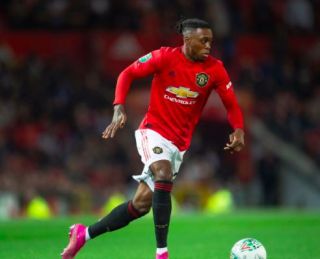 Wan-Bissaka has been exceptional for the Reds this season and is arguably one of the candidates for Ole Gunnar Solskjaer’s player of the year.

The role of a full-back has evolved to some extent in the modern day game with players often operating as second wingers. Trent Alexander-Arnold, for example, may not be completely defensively sound, but is widely regarded as the best right-back in the Premier League for his deliveries from the right-flank.

But Wan-Bissaka has almost perfected his primary responsibility at the age of 22, which is defending.

The former Crystal Palace man is rarely, if ever beaten in a one-on-one situation and has notably kept dangerous winger Raheem Sterling quiet in numerous meetings this season.

Ferdinand believes Wan-Bissaka would also work well in a back three in Solskjaer’s setup.

“Aaron Wan-Bissaka one-versus-one, I’ve seen [Raheem] Sterling play against him and Sterling rinses everybody, he finds it hard against Wan-Bissaka,” he said in an Instagram Q and A, as quoted by Manchester Evening News.

“One-versus-one he will match you physically, he will run with you, he will slide on the floor if you’re getting away from him a little bit more and he has to go into overdrive.

“He can cover people, unbelievable. He could play right side of a back three at Man United if they wanted to, I think he’d be brilliant there.”

The United manager has often opted to play three-at-the-back against sides with more attacking potency this season. Luke Shaw has proved how well a natural full-back can settle in the new position, alongside leader Harry Maguire at centre-back.

If there is one weakness to Wan-Bissaka’s game at the moment it is his ability going forward. Therefore, we could see him working in a back three solely because of his defensive strengths. This would also afford Diogo Dalot a place in the starting eleven at wing-back; the Portuguese youngster is a far more attacking full-back and has been starved of first-team opportunities this season.

But for now, we can’t see Solskjaer changing a winning formula and Wan-Bissaka is performing well at both wing-back and his familiar right-back position.