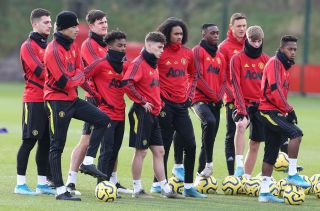 Manchester United have set a possible return date for first-team training amid the spread of coronavirus.

COVID-19 has caused the club to cancel training indefinitely last week, after the game against Tottenham Hostpur was suspended.

The Reds had been set to train the following Tuesday but measures were taken in light of the growing threat of the virus.

The Football Association announced this week that the professional game in England wouldn’t return until at least April 30, a date which still appears optimistic.

And as reported by Manchester Evening News, the club plans to return to training at Carrington as early as April 10.

This date in itself seems overly optimistic as there are clear messages being transmitted from the government concerning social distancing.

Meanwhile, players are currently working through their individual training plans the club has given them from home.

The break in action has come at the worst possible time for Ole Gunnar Solskjaer’s squad, who were gathering momentum heading towards a key period in the season.

We hope when the action does eventually return, United can kick on from where they left off and build on their impressive 11 game unbeaten run.