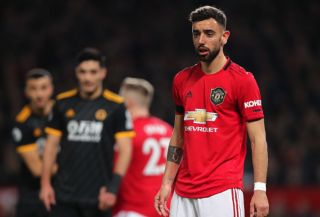 Manchester United did well in January by brining in Bruno Fernandes and Odion Ighalo (on loan from Shanghai Shenhua).

Unfortunately the season has been suspended and so has their growing influence on the team, with the Red Devils currently on an 11-game unbeaten run.

Fernandes completed a switch to Old Trafford from Sporting at the end of January.

Two days later he made his debut against Wolves.

The Portugal international has made nine appearances for the club to date, scoring three goals and registering four assists, and now we must wait for the Premier League to resume to watch him play again.

United fans are buzzing with their new signing, who already has a brilliant chant to his name, and pundits in the media have been full of praise for our Portuguese magnifico.

Wolves’ Ruben Vinagre gave an interview to Portuguese newspaper Record (translated by Sport Witness) and the wing-back was asked if the praise showered by fans and the media on Fernandes are justified.

He said: “Yes, yes. There is an unanimity around Bruno Fernandes. I think the press and the fans are fascinated with what he has demonstrated and rightly so. Bruno arrived in England, saw and won.”

That’s a great quote from Vinagre — and we’re sure plenty in the Wolves dressing room share his views, knowing Fernandes as compatriots.

Asked was he surprised by the impact made by Fernandes at United, Vinagre added: “No, it didn’t surprise me. I followed Sporting and it was clear that Bruno was a different player.

“And the truth is that he arrived here and made a big impact on the team. He has established himself as a Manchester United benchmark and is undoubtedly managing to play that role well.”