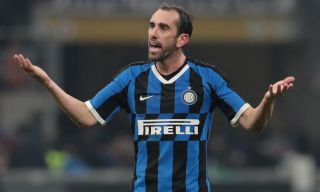 Manchester United are reportedly interested in signing Inter Milan centre-back Diego Godin, who left Atletico Madrid a year ago to join the Serie A side.

The 34-year-old established himself as one of the best defenders in the world during his time at Atleti, but decided to start a new career chapter with the Nerazzurri despite being a key player under coach Diego Simeone.

But Godin’s move to Italy hasn’t gone quite to plan as he’s made 25 appearances so far this campaign, sitting on the bench for four of the last nine Serie A games. It’s because he has looked really old this year – and nowhere near his best.

United were strongly linked with the Uruguayan before his move to Italy, of course, so this suggests we’re still interested in the 34-year-old.

The newspaper edition of Corriere dello Sport, cited by Goal Italy, claims that Inter could be ready to part ways with the centre-back with Valencia and United reported as two interested parties.

United have been relatively good at the back this season — with the fourth best defensive record in the Premier League, conceding 30 goals in 29 games.

Harry Maguire has played a huge role in that by coming in and instantly showing he can lead Ole Gunnar Solskjaer’s team from the back.

Fellow new signing Aaron Wan-Bissaka also made a huge difference by cementing his place at the team’s right-back, a position which we’ve not been strong enough in for some time.

Still, we are of the view that the manager should look to bring in a centre-back this summer because Maguire could do with a better defensive partner than Victor Lindelof.

The timing of the Premier League’s suspension is unfortunate for the likes of Eric Bailly and Luke Shaw, who were only beginning to find good form, with the Ivorian centre-back getting his feet back on the ground after a serious injury kept him out for most of the season.

However, United have only managed 44 goals in those 29 league outings, so perhaps Solskjaer’s priority in the transfer market should be a centre-forward.

The Red Devils began the 2019/20 campaign without a recognised goalscorer after failing to replace Romelu Lukaku, who, along with Alexis Sanchez, left for Inter.

Godin is experienced but is he the right fit for Maguire? Kalidou Koulibaly is still my preferred option but that deal would require a lot more money.

It doesn’t sound promising if Godin has struggled to make an impact in Serie A. Why would we take that risk?