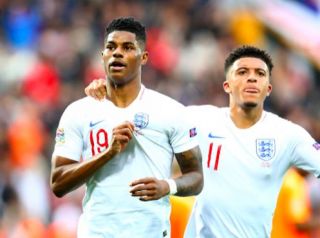 Jadon Sancho is the dream signing for many Manchester United fans this summer.

The Borussia Dortmund winger has lit up the Bundesliga this season, scoring 14 goals and contributing 15 assists in just 23 Bundesliga appearances this term.

But the 19-year-old is widely expected to leave Germany this year to pursue the next challenge in his career.

And according to Mark Ogden of ESPN, Sancho is a leading target for Ole Gunnar Solskjaer at Old Trafford this summer.

Solskjer’s interest in arguably the most coveted young footballer across Europe hardly comes as a surprise. Sancho offers the natural solution to United’s lack of width to support Aaron Wan-Bissaka on the right-flank. His goal contributing stats speak for themselves and he is a player the United boss can focus his long-term rebuild around.

United are seen as one of the leaders in the chase for Sancho, and Marcus Rashford shares a great relationship with the former City academy starlet from their time in the England national team.

Rashford, who often keeps in touch with fans on social media, was asked on twitter if he would have a word with Sancho by a fan if he donated some money to FareShareUK, a brilliant charity helping the most vulnerable at these difficult times.

And unsurprisingly, his response prompted some excited reaction from a selection of overzealous United fans.

Perhaps agent Rashford could get to work this summer…

Ahhh Rashford with the prop pic.twitter.com/OO7geQ8Y3x

Sancho at le theatre😭😭 tears in my eyes pic.twitter.com/zwxnJlGNh7