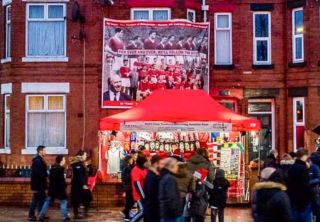 The announcement this morning that Manchester United and Manchester City have donated a combined £100,000 to help food banks in Greater Manchester is a huge boost for the Foodbank Support Appeal.

Manchester United Supporters’ Trust have been operating a Fans’ Foodbank donation point on Manchester United home matchdays for some time, but the impact of COVID-19 means they have been forced to switch to appealing for online donations only.

Many people in local communities rely on food banks and the numbers are likely to rise during the coronavirus pandemic as people face losing their income for an indefinite period of time, and we urge people to help out in whatever way they can.

The current suspension of football has effectively closed that supply source at a time when the need is greater than ever.

MUST response to £100,000 donation by United & City to Foodbank Support Appealhttps://t.co/4NyLJG5U9O#MUFC pic.twitter.com/YXFrP2Ju6z

A spokesperson for MUST, who operate the Manchester United fan’s food bank, said: “This demonstrates an incredible solidarity which has not only bypassed the rivalry between the fans of the two great Manchester clubs but also overcome the fierce rivalry between the fans from the two great football cities of Liverpool and Manchester.  In these uncertain times we urge those who can, to contribute generously to this important initiative via the online fundraising page.”

This is fantastic news and a money that’s been donated by United and City is sure to go some way towards helping people out at this time. A lot of people are working from home — but even at that, they may struggle to carry out all operations, like these food banks, if the spread of COVID-19 continues for months which is looking likely.