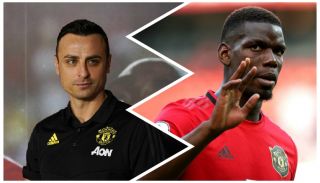 Dimitar Berbatov believes the criticism Paul Pogba gets is unfair.

Paul Pogba’s second spell at Manchester United has been somewhat underwhelming. It’s easier to see that now after witnessed Bruno Fernandes’ instant impact in the side since joining the club in January.

The Frenchman has come under fire from certain pundits since returning to Old Trafford.

Ex-Manchester United striker Dimitar Berbatov has come out with a strong defence of Pogba. He claims the midfielder just gets criticisim for the sake of it, “like some other players”.

Who else could Berbatov be talking about?

Pogba is a fantastic player but he gets a lot of criticism because his agent, Mino Raiola, is constantly in the press disrespecting United and Ole Gunnar Solskjaer.

“The criticism Pogba gets is unfair and he, like some other players, get criticised just for the sake of it, it doesn’t matter what he does,” Berbatov is quoted by the Evening Standard.

“He is doing everything he can to get fit and when he plays to help his team because I have seen first-hand how he used to train with us as a boy, with ambition and the aspiration to be one of the best, so I don’t doubt his work ethic and desire to become even better. All he will want to do right now is play football, we are all human beings and as much as you try to avoid it, criticism always gets to you.

“I would like to see Pogba get fit as soon as possible and not get injured again, so that he can do what he does best and we can see him play great football.”

Pogba’s biggest issue has been his inconsistent displays, though that didn’t stop him winning the World Cup with France, after rejoining United. He was fairly poor under José Mourinho before showing glimpses of brilliance under Solskjaer.

He has made just eight appearances for United this season due to an ankle injury, but he seems more interested in a transfer away from Old Trafford than getting back on the pitch.