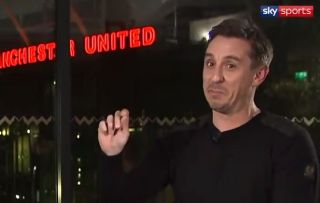 The current season is on hold until at least April 30, and we don’t expect it to return then either, with an announcement yesterday that the campaign could be extended indefinitely.

But how will that affect the 2020/21 campaign that is supposed to begin this August? This should give Liverpool the chance to eventually win the title but we can’t have seasons running into one another if this drags on for months.

Neville says he’s been teasing Carragher by saying any title victory for the Reds needs a little asterisk next to it.

He added that Carragher has been getting a “twitchy” about the situation.

Check the video from Sky Sports in the tweet below:

'It would be a doomsday scenario for football not to finish the fixtures…'❌@GNev2 says as far as football is concerned, the season has to finish – but he still can't resist winding up @Carra23! 👀

The Manchester United also made it clear on a more serious note that football is far from the most important thing right now, which is what we said on this week’s podcast — listen here.