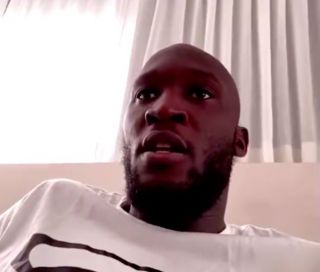 Romelu Lukaku has opened up on his Manchester United exit in an honest interview with Arsenal legend Ian Wright.

The Belgian international left Ole Gunnar Solskjaer a premium striker short in the summer transfer window as he signed for Inter Milan for a reported £74m.

Despicably, United failed to back their manager in replacing such a prolific goalscorer and Solskjaer had to settle for a January deadline day move for Odion Ighalo, albeit a loan deal that has proved fruitful thus far.

Despite reports of the contrary, Lukaku maintained that he had a good relationship with his old boss Solskjaer despite making his intentions clear he wanted to leave Old Trafford this summer.

In fact, Lukaku credited the Norwegian for facilitating his exit, and thinks the future looks promising under his stewardship.

Unsurprisingly, Lukaku has continued his impressive goal record in Italy, netting 17 times in 24 Serie A starts for Inter this season.

But he was never really suited to the fluid style of football Solskjaer is attempting to implement and his exit was best for both parties.

United still need to prioritise signing a striker in the next transfer window that an match Lukaku’s goalscoring exploits.

See the clip below, courtesy of Ian Wright’s Youtube channel: