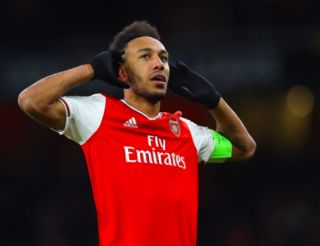 Arsenal may once again have failed to learn from their mistakes and risk losing their key star in the summer transfer window.

Pierre-Emerick Aubameyang is now being heavily linked with a move away from the Emirates Stadium amid growing uncertainty around his contract situation.

The Gabon international’s contract runs out at the end of next season and Gunners Head of football Raul Sanllehi and technical director Edu are keen for their star forward to commit his long-term future to the club.

But according to the Sun, Aubameyang will only sign a new contract if the club are playing in Europe next season.

This may not be discovered until deep into the summer due to the latest FA update on coronavirus  on Thursday.

Therefore, there is serious possibility Aubameyang could leave North London on a free next summer, similarly to Welsh midfielder Aaron Ramsey.

The Sun’s report claims Manchester United are keen on signing the 30-year-old, as well as Barcelona and Paris Saint-Germain.

While Ole Gunnar Solskjaer is targeting younger prospects in his long-term rebuild, it is claimed Aubameyang could be available for a ridiculously cheap £35m.
Embed from Getty Images

This seems ludicrous that a club of Arsenal’s size would let their best player go to a direct rival once again, so we’ll obviously take these reports with a pinch of salt.

Aubameyang is a proven goalscorer and has netted 17 times in the Premier League this season, behind only Jamie Vardy in the goalscoring charts.

Solskjaer still needs to prioritise a natural goalscorer that can offset the loss of Romelu Lukaku last summer and there is chance that Aubameyang could become a viable short-term option.

He would offer pace, versatility and a poacher’s instinct United’s front three.