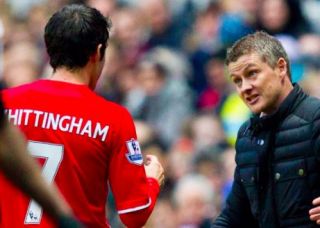 The former Cardiff City midfielder suffered a fall in a pub in Barry on March 7 and was in hospital with his injuries.

Cardiff confirmed that Whittingham passed away on Thursday after the accidental fall.

Solskjaer, who managed Whittingham for a brief period during his time in south Wales, expressed his devastation at news of his death.

“I was deeply saddened to hear of the passing of Peter Whittingham,” the United manager said, as quoted by the club’s official website.

“Peter was a fantastic footballer and an incredible human being. I thoroughly enjoyed working with him during my time at Cardiff City.

“It’s hard to believe that he has been taken from us at such a young age. Peter will be deeply missed and our thoughts are with his family at this very sad time.”

Whittingham was an extremely talented footballer who will be remembered as a club legend in Cardiff after making over 450 club appearances.

He also had spells at Aston Villa and Blackburn before retiring in 2018.

Our thoughts at Stretty News go out to Peter’s family and friends at this difficult time.