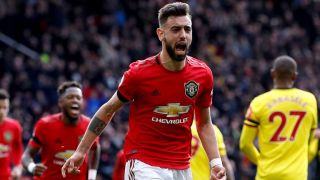 Skriniar and Fernandes spent one-year together at Italian club Sampdoria.

Inter signed Skriniar in 2017 while Fernandes moved to Sporting Lisbon before eventually getting his big move to United in January.

Fernandes has hit the ground running at Old Trafford — winning February’s Premier League Player of the Month award — and Skriniar has hailed the Portugal international.

“I think one of my best team-mates was Bruno Fernandes,” Skriniar said during a Q&A for Inter’s official website (translated by SportsKeeda).

“I always liked him back from our time together at Sampdoria.”

A conversation with Milan Skriniar as our Nerazzurri defender answers all of your questions!#TogetherAsATeamhttps://t.co/TcxQu95QFK

Serie A is another league on hiatus amid the COVID-19 pandemic, with Italy being the worst affected country in Europe.

Skriniar is a defender we’ve discussed a lot on Stretty News for news. With Harry Maguire looking like a United centre-back, it’s important that we use the summer transfer window to find him the right partner and this wouldn’t be a bad shout.

The top target should be Napoli’s Kalidou Koulibaly but United are likely to look for someone cheaper as they invest heavily in other parts of the team.