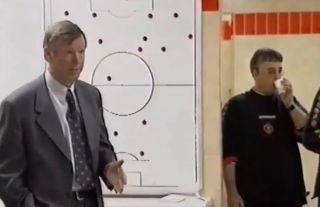 Sir Alex Ferguson didn’t have to tell his players a lot before taking to the pitch to play Liverpool.

Everyone knows what it means. New signings quickly learn how important it is we beat Liverpool, and if they don’t there’s something seriously wrong.

I love watching back at how Ferguson interacted with players and footage like team talks is rare.

Of course it is, do you really think Fergie would have wanted cameras in the dressing room for every match, taking note of everything he did in games?

We love it when the players leave the dressing room and he tells them not to let themselves down.

"Don't let yourselves down now, Don't even f**king attempt it"pic.twitter.com/KnQAXarDhK

United went on to win 2-0 at Old Trafford.