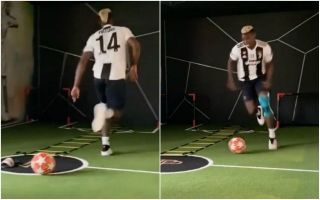 Matuidi was confirmed on Tuesday as the second Juve player to have tested positive for COVID-19 (via Calciomercato), with Daniele Rugani being another case announced earlier this month.

The Manchester United midfielder is seen training in a ‘Matuidi 14’ shirt in the video below, opined by Victor Lindelof sporting a ‘Ekdal 6’ jersey in support of the defender’s Sweden teammate Albin Ekdal – who is one of five Sampdoria players to be infected by the virus.

Check out the video below (via Paul Pogba’s official Instagram):

United supporters should be exited to see Pogba back in training, even if it’s in the comfort of his own home with players told to stay away from Carrington.

These are challenging times for everyone. Stay safe.