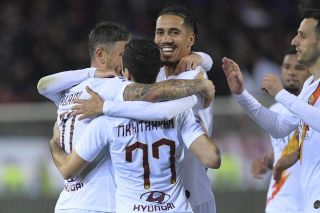 That’s according to La Gazzetto dello Sport (via Daily Mirror), and the report cites Roma and three Premier League sides including Arsenal, Tottenham and Everton in all being potential buyers.

Smalling has spent the season on loan at Roma, so there’s a strong likelihood he will stay there if the two clubs can come to an agreement over a transfer fee.

The Englishman has impressed during his time in Italy and Roma will be trying to turn his deal into a permanent one.

There could be problems over the transfer fee, though. La Gazzetto hello Sport state that Roma know that they stand the best chance of signing Smalling but are ‘shocked’ at United’s alleged £25m asking price.

A lot of that probably depends on whether Roma get into the Champions League and nobody knows what action the leagues will take amid the coronavirus outbreak.

Football is suspended for now and talks will commence soon about what to do with the rest of the season.

It will be interesting to see what happens to the summer transfer window if domestic games could potentially be rescheduled for then.