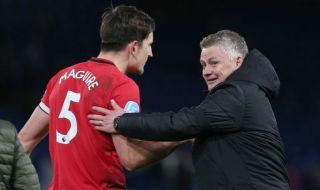 A shocking realisation came over me recently.

Perhaps it was half-way through the recent stroll in the training park against LASK. Maybe it was the togetherness we saw in the win against ‘Citeh’. It certainly could have been prompted by the fact that Bruno Fernandes swept the board when it came to the player of the month for February. But hold the presses folks, and whisper it quietly, we may have actually had a……decent team at the moment.

Now don’t get me wrong. Being in 5th place before this current suspension is not where reds fans would want to be. Three points might not be a huge difference between us and the top four but there is only six between us and tenth spot. There was progression to the latter stages of the cup competitions which is a positive, but we ended up getting wiped out at home by Manchester City. Reaching the quarter-finals of the Europa League was good for confidence but let’s be real…it is still the ginger cousin of the Champions League.

I believe you have to look at where the team was coming into the backend of last season and into the summer. It was painfully clear that many of the duds in the squad needed to be shipped out and fresh blood had to arrive. There were certainly departures. Antonio Valencia left for back home in Quito. A short-term measure at right-back had become nearly seven years. Fans wished him well as a former captain and hoped someday he would be able to learn to cross and/or beat his opposing player once more. Italy seemed to become the prime destination for our cast-offs. Romalu Lukaku and Alexis Sanchez flew off taking both a sulky attitude and massive wages. Chris Smalling joined them after joining Roma on loan. Ander Herrera left on a free to join the biggest chokers in European football after contract talks broke down. So yeah, cool. And obviously we got a raft of new signings, right? Right?

Not exactly….While we had all these players off on their merry way, transfers in was a completely different story. The team was set to head into the new season with a fairly threadbare line-up. Our strikers consisted of a seventeen-year-old with one senior league game under his belt, a stroppy Frenchman and a lad who had never scored more than twenty in his career. Our midfield had a Serbian statue, a lad who ran and ran, a confused looking Brazilian and a stroppy Frenchman. Our backline contained some of the most accident and injury prone players in history, a tubby left back and converted winger at right-back. No wonder big Dave would have nightmares. This didn’t inspire a great deal of hope.

As fans, we generally have lists of fantasy signings, but for many it was just practical. We needed a right-back who actually knew how to play there, a centre-half who wasn’t going to fall apart and/or be a calamity, a winger with pace instead of a grumpy forward shoved out to the flanks, a back-up striker and midfield numbers. Easy.

But transfers are very seldom straightforward at this club. We managed to get three of our desired requisites and sought to carry on. But we continued to be horribly inconsistent. Not likely to go on long losing streaks but unable to string too many victories together either. Just a lot of draws punctuated by the occasional noteworthy win or eye-watering defeat. Emblematic of a side lacking experience managed by a chap unused to being in charge of a club this size. We did have some bright moments. Wan-Bissaka endeared himself to many with his no-nonsense tackling, Daniel James impressed early on, Scott McTominay become a cult hero, Brandon Williams lived out many local lads’ dreams and Rashers begun to start adding those goals to his game we all knew he had in them. But the team was vulnerable to injuries. And by God, we had our fair share of them.

Rashford, Pogba, Matic, McTominay, Martial and Maguire were all out at various times. And quite often at the same time. Along with the usual suspects of course. The period of December/January was especially grim. And fans didn’t know who was going to be next or what crap performance was around the corner. Three defeats in four games did not help our cause to finish anywhere near the top four. Possibly closer to the bottom at this point, given how congested things were.

One or two signings changed it all? Maybe. Getting bodies back. Definitely. But throughout all of this, Ole had remained calm and steadfast in his approach. Despite the panic, and strange decisions at times, many felt things were on the right track. Performances were infinitely better than what they had been under the gloomy spells of Jose and Van Gaal. He set out the players he wanted. Counter attacking is not a style, but recent weeks has seen us more on the front foot. Keeping the ball in dangerous areas and picking up on mistakes. Getting to a degree of a settled defence and seeing the emergence of leaders in many different areas. Players that are excited to play for the shirt rather than being dragged down by it.

Who knows what the future might hold. We don’t even know what will happen beyond this ‘break’. It does seem in a better place than where we were. And isn’t that what all fans might aim for. Other than the Mickeys being docked sixty points for Klopp’s irregular looking teeth. And for ‘Citeh’ to go back to pre-investment status. And for Leeds to continue doing a Leeds.