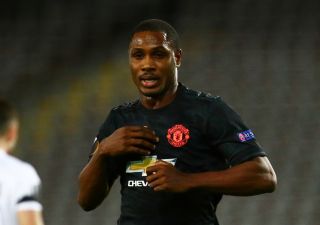 Odion Ighalo is reported ready to take a £6m pay cut in order to complete a permanent move to Manchester United, according to a report.

The Mail is reporting that Ole Gunnar Solskjaer wants to keep the Nigerian striker at the club following his excellent performances since his loan move from Shanghai Shenhua.

According to the same report, Ighalo’s current deal with the Chinese club earns him £240,000 a week, which would make him one of the best-paid players at Old Trafford — and that’s not going to happen.

It goes on to add that Ighalo’s current contract with Shanghai Shenhua won’t expire until 2021 but there will be an option for United to sign him in the summer.

The former Watford striker has scored four goals in eight games in all competitions so far, but unfortunately the season has been suspended over COVID-19 and Ighalo may have even played his final game for the club, unless football resumes before June or if attempts are made to sign him permanently.

@ighalojude has had a great start at United, and we’d like him to stay regardless of what happens with the remainder of the season. We also hope everyone stays safe and healthy. #COVID_19 ❤️🇾🇪 #mufc #manutd

His stats since joining speak volumes.

An option for the bench or someone to push Anthony Martial on. Either way signing Ighalo would be a good move for the Red Devils.

Updates on contracts when we have them.