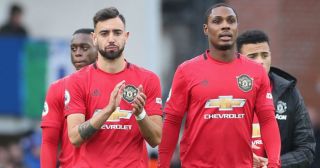 Andy Mitten has penned another one of his many brilliant Four Four Two columns.

The United We Stand editor makes an important point about how Ole Gunnar Solskjaer’s Manchester United were beginning to find form an identity, which will be difficult to build on now training is off with staff working from home.

The players are in isolation, we’re sure, but this COVID-19 outbreak will affect players more than that. Think about the lads who have families living abroad. It’s a scary time and their match fitness will probably turn to mush.

Nobody really knows when a ball will be kicked again.

Mitten also confirms that no United player has tested positive for coronavirus.

“At United, most staff are working from home while the players were still scheduled to train as normal at Carrington until Monday’s UK government announcement. They didn’t and don’t know when they’ll be putting their boots on in earnest again. It takes six weeks to reach full fitness level and 10 days to lose it if they do nothing. None have tested positive for coronavirus. The players are mostly away from their families, who are living in other countries, too. It’s a difficult situation.”

Paul Pogba was set to return to training but is there any point in doing so now, when nobody knows if the current season will need to be cancelled or not? People argued that he’d need to return at some point to get into France’s squad for Euro 2020 — but that has been cancelled.