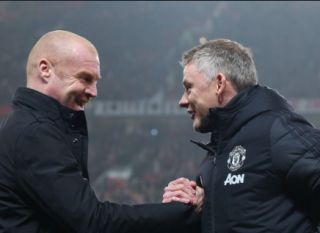 Burnley’s Sean Dyche has been named Premier League manager of the month for February ahead of Ole Gunnar Solskjaer.

The Clarets defeated Southampton and Bournemouth, as well as drawing to Newcastle and Arsenal as they moved into the top half of the Premier League before the coronavirus postponement.

Manchester United boss Solskjaer was perhaps unlucky not to win the award after also going unbeaten in the month of February.

The Reds are unbeaten in eleven games in all competitions and the three league games in February were Wolves, Chelsea and Watord.

The 0-0 draw against Nuno Espirito Santo’s side was dull and uninspiring.

But the inspiration needed in the emphatic victories against Chelsea at Stamford Bridge and Watford at Old Trafford came in the form of new signing Bruno Fernandes.

Some United fans felt that Solskjaer was unlucky not to pick up his first managerial award of the season.

But in truth, expectations are much higher at Old Trafford than at Turf Moor and Solskjaer would have been a much stronger candidate for the award if United had beaten Wolves at the start of the month.

My manager got robbed. pic.twitter.com/NfMLimMuWh

how has ole not won it!!!? daylight robbery.