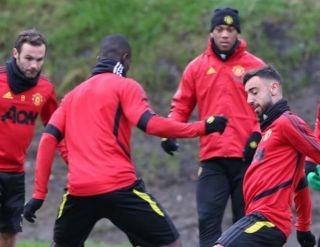 Manchester United cancelled first-team training on Tuesday as a result of growing concerns over the coronavirus outbreak.

PM Boris Johnson said in his public address on Monday that there should be no non-essential travel or social contact, and the club has therefore taken measures to cancel their training at the Carrington facility.

Ole Gunnar Solskjaer’s side were set to resume training on Tuesday, despite the fact they are not set to return to action until at least April 4th, a date which seems optimistic in itself given the global pandemic we are facing.

The United boss was keen to continue working with his players, but the Manchester Evening News now reports that the squad will be given the next three days off and sent personalised fitness plans to follow.

The postponement of football has come at the worst possible time for United, who were heading into a critical period enjoying their best form of the season.

Just two goals have been conceded in an eleven game unbeaten run that has left the Reds still fighting on three fronts if football eventually resumes and the season is not voided.

But momentum has now been halted and this has been compounded by the fact it is no longer deemed safe to train with one another.

Fortunately, FourFourTwo columnist and United We Stand Editor Andy Mitten confirmed earlier that there were no coronavirus cases amongst players or staff at the club.