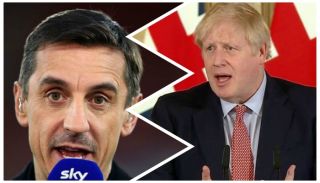 Manchester United legend Gary Neville has labelled the Prime Minister a ‘charlatan’ in a post on Twitter.

According to the Independent, Johnson urged Brits to ‘avoid pubs, clubs, theatres and other such venues’. The Prime Minster also called for people to stop all ‘unnecessarily travel.’

However, schools are still open so you can only imagine how much spreading this virus is still allowed to do in European countries, and most experts say this coronavirus has yet to reach its peak.

Neville replied to a tweet suggesting that Johnson is ‘going to close schools in a few days anyway’, when someone questioned the Sky Sports pundit’s point about avoiding social venues when schools are kept open.

These are worrying times and it doesn’t look like Johnson know what to do. He was made PM to get Brexit over the line, but this is a whole new disaster. He’d struggle to organise a sesh at a brewery.

With football still suspended for the foreseeable future, it doesn’t sound like we will. Be seeing top-flight football anytime soon.