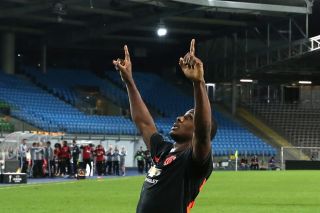 Odion Ighalo has been a welcome addition at Manchester United.

Since joining the Red Devils on loan, the Nigerian striker has scored four goals in eight matches.

However, it doesn’t look like Ighalo will play many more games for the club with the football season is in doubt over COVID-19.

Many United fans were underwhelmed with his arrival because they rightly argued that a goalscorer was needed in the summer when Romelu Lukaku was sold to Inter Milan.

But, to Ighalo’s credit he has proved them wrong so far. United were desperate to bring in a striker during the January transfer window, there’s no two ways about that, and even made last-ditch attempts to sign Bournemouth’s Joshua King.

It’s always going to be difficult to sign a big name striker in January — but we were actually thrilled with Ighalo, knowing he has Premier League experience and is a sheer goal-poacher.

There’s a strong argument to keep him beyond his loan deal.

We don’t know when football will resume but a £15m deal with Shanghai Shenhua, as reported by The Mirror, sounds pretty good.

What does that mean for Marcus Rashford

This season Rashford proved he is more adept on the left flank — managing 15 goals in 19 games in that role. He may consider himself a centre-forward but Solskjaer had him at his best while Anthony Martial played up front, so the potential acquisition of Ighalo could mean more for the Frenchman than Rashford.

Solskjaer was understocked in the strikers department following the departures of Lukaku and Alexis Sanchez, so Rashford has spent time in the team as a frontman this season. At least the arrival of Ighalo would give the manager a real centre-forward to take up that role either as first choice or as a back-up option to Martial.

Not only have we benefited from having Ighalo on the pitch since his arrival, you can tell it’s a dream come through for him to play for United and we need more players like that.

It would be a shame if coronavirus stops him fulfilling that dream for the six months he was promised.