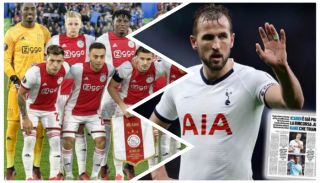 It seems Manchester United are looking for another midfielder.

Reports claim the Red Devils haven’t given up on Ajax star Donny van de Beek. He has been strongly linked with Real Madrid this year yet still remains in Amsterdam with his future unknown.

Apparently, the La Liga giants had the agreement in pace last summer but they failed to sell any of the players who would have provided them the funds to land Van de Beek.

READ MORE: Every Man Utd player out of contract in June amid end of Premier League uncertainty

The Mirror has reported that Real Madrid are still keen to sign the midfielder, to the point they felt the transfer was already wrapped up…

He’s the type of dynamic midfielder who would add a lot to United in the centre of the pitch, and the prospect of seeing him in the same team as Bruno Fernandes is mouth-watering to say the least.

But the Mirror’s report goes on to suggest that United are now trying to launch a late bid to sign the Ajax man, which could cause concern for Madrid.

United may have a chance to step in either with the report stating that a lack of funds and the uncertainty around Zinedine Zidane’s future means the Spanish club would hesitate to finalise the deal.

Do they still want Paul Pogba?

Harry Kane to turn down offer from Manchester United

Juventus are eyeing a shock move for Harry Kane if Cristiano Ronaldo turns down a new deal at the club, according to the Daily Mail.

The former Man Utd winger is set to be offered a deal to stay at the club until after his 39th birthday. That would see him remain in Turin for another two years — with his current contract expiring in 2022.

On the other hand, the Tottenham striker in question has recently been linked with a move away from north London, with both Manchester clubs said to be interested.

Kane’s hungry for silverware. Everyone seen that day coming!