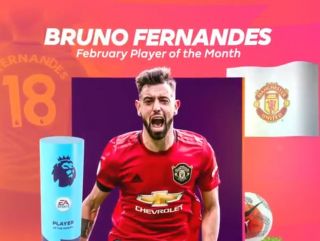 Some positive news away from COVID-19.

Bruno Fernandes has won the Premier League’s Player of the Month award for February.

The Portugal international only joined Manchester United on 30 January. Needless to say to be voted the league’s best player — with no PL experience — in his first month is a remarkable achievement.

READ MORE: Man Utd star praises Solskjaer after helping him get back on track

It’s a shame that with football suspended over the coronavirus we’ll have to wait to see Fernandes and United in action again, but obviously that’s for the best right now and everyone needs to be kept safe.

The 25-year-old looks like he could be a hugely important part of this side for years to come — and he could be a player worth building the team around because he contributes all over the pitch and leads by example.

As announced in the PL tweet below, Fernandes is February’s Player of the Month.

Congratulations to @B_Fernandes8 on winning the @EASPORTSFIFA Player of the Month for February 🔴🇵🇹#PLAwards pic.twitter.com/475tuPlc00

Those are important traits to have as a Manchester United player, and they can help explain why so many signings haven’t worked in recent years.