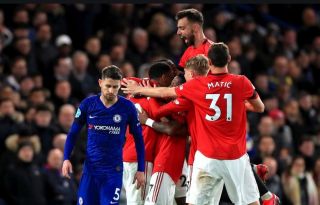 Three Manchester United players face uncertainty over their futures if the season drags on beyond June because of their contract expiry dates.

The suspension of the Premier League amid the coronavirus outbreak has caused plenty of confusion.

We don’t only not know if Liverpool will be given the title, but what about top four and the fight for relegation? The Premier League is scheduled to resume on 3 April but we don’t see that happening and the football calendar will become even more stretched if the league suspension drags only any longer.

Some big names will be out of contract around the league on June 30 — and there remains the prospect of the season being extended beyond that date, with Euro 2020 potentially being delayed a year and become Euro 2021.

Manchester United players out of contract in June 2020

Ighalo, who arrived on a six-month loan deal in January, has loved his brief time at Old Trafford and it would be a huge shame if it come to a sudden end now. He’s been doing really well to come in from China — where he spent three years after leaving Europe — and hit the ground running.

Earlier in the season we would have confidently said Matic’s time at the club was over, but his form picked up after Christmas and his experience could be key as Solskjaer tries to build a team capable of winning silverware. United should sign a younger midfielder to protect the defence and keep Matic on standby so long as he’s happy to play a bit part role now he’s 31. According to Manchester Evening News, the Serb will be handed a new contract.

As for Fosu-Mensah, he’s another one that could fall into the unlucky category. The Dutch international hasn’t played a minute of football due to recovering from a serious knee injury and nobody knows if he’ll be given a contract extension or release come June.

And finally, Angel Gomes, the extremely talented midfielder who can’t get a look in right now. He needs to be patient, sign a new deal and maybe look to go out on loan next season. The same advice we had for Tahith Chong not long ago.