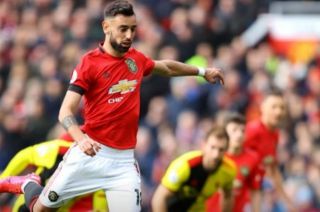 Bruno Fernandes has said that despite popular opinion, shared by pundits and fans alike, Manchester United’s recent run of results is not solely because of him.

The Portugal international joined United from Sporting Lisbon in the January transfer window and has admitted that the move was ‘easy’.

As things stand, United are on an 11-game unbeaten run in all competitions but football has been postponed for the foreseeable future due to the COVID-19 outbreak.

Fernandes has quickly adapted to life in Manchester and he’s already scoring and setting up goals for his new team-mates.

Speaking to Sky Sports, Fernandes said: “The decision was easy because when I had the chance to come, I didn’t think twice.

“I talked with Sporting, who had already had some discussions with Man United about my transfer and when they talk with me, I told them my first choice was Man United and it’s what I need for my career.

“I see the same team from one month ago. I think we are the same and have a lot of hunger to win, to give a lot, to do better and better in every game.

“In the last month, we’ve had a lot of really good games and I think we can talk about a new start after Bruno, but it’s not about Bruno, it’s about the team.

“The team needs the right focus, the right decisions at the time and I think also if Bruno doesn’t come, Man United would win the same because one player doesn’t change a team.”

It’s great to see that Fernandes is humble but we don’t agree that results would have been the same since January even if he didn’t join us before the transfer deadline.

The club and players are all trying to finish the season as strongly as they can once football resumes across Europe.