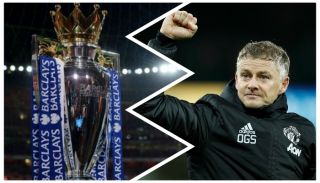 The Premier League has shut down until the 4th of April, with a strong likelihood that it will be postponed again or maybe even cancelled.

There is no guarantee we will be over this nightmare in three weeks, so CODVID-19 has the future of the current campaign up in the air, as well as leagues in other European countries.

CaughtOffside have suggested four ways the 2019/20 season could end, based on the options being assessed in Italy, where Serie A began taking action against the coronavirus weeks ago.

The first option is to have a “vacant title” which will get the backing of many Manchester United fans wanting to stop Liverpool claim their first league triumph in 30-years. Effectively the table is left the way it is — nobody gets relegated, but Leeds United and West Brom could still come up forming a 22-team Premier League next term, with five teams then facing the drop as a result.

The second shout is going to be less popular. That would see the season end based on current standings — Liverpool win the league, United finish fifth, and Norwich, Bournemouth and Aston Villa would have to accept relegation.

What would that mean for Manchester United trying to get back into the Champions League?

Ole Gunnar Solskjaer side has all but qualified for the Europa League quarter-finals after coming away from LASK with a 5-0 win in the first leg.

Nobody wants that outcome, so what about play-offs for the title and relegation? Liverpool fans won’t be happy but they’re a small minority in this discussion. Depending on how many clubs they’d have to include, United may even have a chance of winning title number 21, and that would really pour down on Liverpool’s parade.

Respected football writer Gabriele Marcotti in favour of a play-off and says the title and Champions League places could be decided among the top five. Liverpool could get a buy into the semi-final with the rest starting in a quarter-final like round.

Depends on how many games they can play, but if it is option 3 + you can manage 8 games I'd like a mini-league which takes into account points accrued so far. Maybe home/away and..
1-5 – Title/UCL
6-10 Play for 2 Euro spots
11-15 bottom gets relegated
16-20 bottom two go down https://t.co/I5qjzsBGzM

The UK is not expecting a peak of COVID-19 cases until mid-May, so it seems extremely unlikely that games will resume in early April. There could even be a further delay into May or June and we’ll know more on Tuesday whether Euro 2020 will go ahead or postponed for a year…

Opinions will be divided on what the best of course of action is, and we’d say anything that stops the Scousers from winning the title.