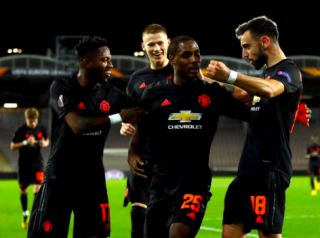 Manchester United unsurprising dominate the Europa League team of the week after the 5-0 thrashing over LASK.

Ole Gunnar Solsjaer’s side cantered to the emphatic scoreline, as they continued their fantastic form with a convincing display, albeit in strange circumstances.

LASK were no match for United, but would have undoubtedly benefitted from a home support generating an atmosphere.

Instead, the game was played in eery silence behind closed doors due to the coronavirus outbreak.

If anything, this fixture showed that playing games in empty stadiums as a way of avoiding spreading COVID-19 is definitely not the way forward.

United’s second leg has been postponed by UEFA with all other Europa League ties, so they will have to wait to confirm their progression into the quarter-finals.

Goal scorers Odion Ighalo and Daniel James made the team, as well as the ever-improving Fred who produced a wonderful assist for Juan Mata to make it 3-0.

See the Europa League team of the week in full below.