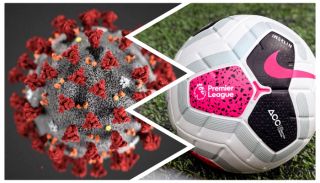 The Football Association is to suspend all Premier League fixtures until 3 April.

This news was hardly unexpected but it shows the football league acting quicker than Boris Johnson’s government. Still, it should have come earlier — and not only be prompted by a Premier League manager testing positive to COVID-19.

A welcome announcement that comes after UEFA decided to postpone next week’s fixtures in the Champions League and Europa League, along with the draws for the next round.

And, to be honest, I don’t really see how a 3 week break is going to help while the spread of COVID-19 worsens.

They’re saying April at the earliest but this is likely to run on a lot longer.

The Premier League, FA, EFL and WSL have collectively agreed to postpone the professional game in England

The above statement from the Premier League comes across as though they are trying to survive these three weeks before coming to a conclusion that sees the season completely cancelled.

Of course, the legal side of this must feel like boiling water. It’s crazy that the Cheltenham Festival has gone ahead all week.

Arsenal manager Mikel Arteta has been tested positive for COVID-19 and a number of Premier League players are reportedly showing coronavirus-esque symptoms, as per the Standard.

Following a meeting of Shareholders today, it was unanimously decided to suspend the Premier League with the intention of returning on 4 April, subject to medical advice and conditions at the time.

Premier League Chief Executive Richard Masters said: “Above all, we wish Mikel Arteta and Callum Hudson-Odoi speedy recoveries, and everyone else affected by COVID-19.

“In this unprecedented situation, we are working closely with our clubs, Government, The FA and EFL and can reassure everyone the health and welfare of players, staff and supporters are our priority.”

Despite the challenges, it is the Premier League’s aim to reschedule the displaced fixtures, including those played by Academy sides, when it is safe to do so.

In this fast-moving environment, further updates will be provided when appropriate.

Loads of Manchester United fans have been reacting to the news on Twitter, as seen by the selected reactions below:

🤣 Imagine the amount of tears and petitions. #PremierLeague pic.twitter.com/7ERTBqoqKf

Paul Pogba confirms he’s been in self-isolation since August.