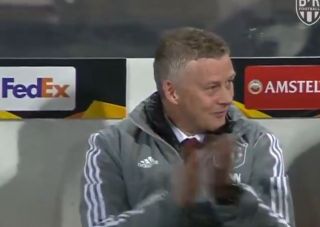 The cameras caught Solskjaer’s approval of the goal and he is visibly delighted.

It was Ighalo’s fourth goal in three starts for the club and what a goal it was!

Solskjaer has more than Ighalo’s goal for reasons to be happy with his side at the interval as United have dominated from the start.

The fantastic goal warranted this reaction from the boss, as seen in the video below (footage courtesy of B/R Football):

It feels weird watching the game from behind closed doors and it almost sounds like a training match.

But United are ahead thanks to Ighalo who is really enjoying his time at the club.

Let’s hope we score more goals in the second half and ensure a place in the next round.