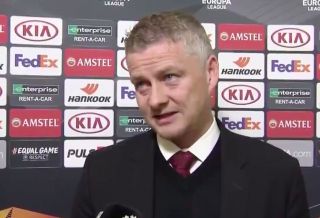 Ole Gunnar Solskjaer is confident that his Manchester United side is strong enough to get the job done against LASK in the Europa League last 16 first-leg this evening.

The Norwegian has made five changes to the side that put in a monumental effort to beat Manchester City at Old Trafford on Sunday.

There’s been a strange build up to tonight’s fixture, with rumours that the game could be called off due to coronavirus fears.

Instead the game will be played behind closed doors, much to the disappointment of the travelling United fans.

But Solskjaer insisted United need to create their own atmosphere on the pitch by producing a positive performance, and he has more than enough quality at his disposal to do so.

Juan Mata and Scott McTominay return to the starting eleven, and Odion Ighalo plays up front instead of the injured Anthony Martial.

🎥 Time for a pre-match word with the boss! #MUFC #UEL pic.twitter.com/o31pqEpL5A