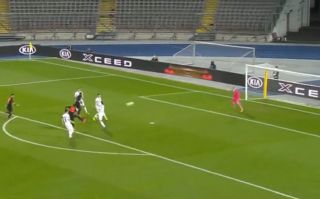 Odion Ighalo has opened the scoring for Manchester United, netting an important away goal against LASK in the Europa League Round of 16.

It feels weird watching tonight’s game with it being played behind closed doors — but thankfully United are ahead on the night.

Ighalo has now scored in all of his three starts for United and tonight’s opening goal was a scorcher!

He receives the ball at the edge of the box before smashing it past the goalkeeper, as seen in the video below (courtesy of BT Sport):

Solskjaer’s reaction says it all! pic.twitter.com/JisDmPsJDh

There will be shouts for Ighalo’s deal to be made permanent if he keeps this up!