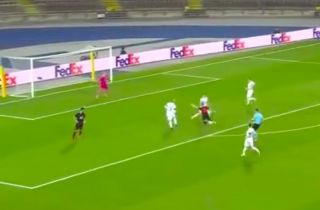 Daniel James has ended his lengthy goal drought to double Manchester United’s lead against LASK in the last 16 of the Europa League.

In eery surroundings due to the game being played behind closed doors because of coronavirus fears, Ole Gunnar Solskjaer’s side have completely dominated and are fully deserving of their 2-0 lead.

James has been incredibly frustrated at not having scored for the Reds since August 31st against Southampton, after he made a flying start to his United career.

But after over 30 appearances the drought is finally over.

The Welsh winger cut inside from his preferred left-position and found the bottom corner with a pin point finish after being allowed far too much room to strike.

It’s been a comfortable night for the Reds as they continue their unbeaten run, albeit in very strange circumstances.

"The goal drought is over!"

Daniel James bags his first goal in 32 games his relief is clear to see 🙏 pic.twitter.com/1E14gUhPqM