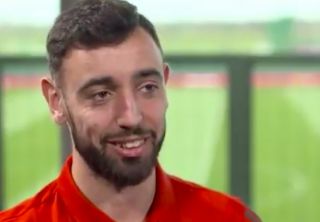 Bruno Fernandes loves Manchester United and already has a special connection with his fans.

The Portugal midfielder has had a remarkable impact in such short space of time at Old Trafford. Fernandes looks like he’s been running Ole Gunnar Solskjaer’s midfield for years with his combination of swagger, leadership and quality in the middle.

He won the Premier League Player of the Month award in his first month at the club and has been instrumental in United’s recent upturn in form.

It didn’t take long for Fernandes to adhere himself to fans on the terraces and the iconic shush to Pep Guardiola in the Manchester derby only enhanced his growing reputation as the hero of Old Trafford.

The new chant for Fernandes has caught on well on the terraces and even the player himself loves it!

Watch Fernandes sing his own new chant below, courtesy of Sky Sports: