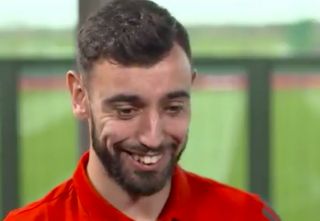 Bruno Fernandes has explained why he shushed Pep Guardiola in Manchester United’s 2-0 victory over Manchester City on Sunday.

The Portugal midfielder cheekily put his index finger to his lips at the City boss, but claims this was because of the disrespect the Spaniard had shown him at the time.

United fans love Fernandes’ arrogance and confidence on the pitch and this gesture against a rival only enhanced his reputation amongst the terraces further.

What an impact the January signing has made in such a short spell at the club. Bruno’s attitude cannot be faulted and his quality  in attacking midfield has taken United to the next level.

Fernandes is expected to play a key role tonight in the Round of 16 first leg fixture away to Austrian side LASK, which will be played behind closed doors due to coronavirus fears.

Hear why Bruno decided to shush Pep below, courtesy of Sky Sports:

Bruno Fernandes on why he shushed Pep Guardiola in the Manchester derby pic.twitter.com/oVxAVQnwZw