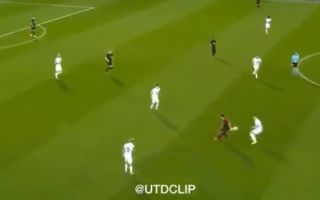 Everything about the Portuguese midfielder oozes class and it didn’t take long for him to show some mouth-watering skills in today’s Europa League clash against LASK.

The game went ahead despite rumours UEFA might suspend the Europa League and Champions League. Euro 2020 may even be in doubt.

In the video below (footage courtesy of BT Sport), Eric Bailly is seen coming out of defence playing a pass to Fernandes, who uses the outside of his right boot to flick the ball around the LASK player coming in behind.

He left him for dead!

The match is being played behind closed doors due to the coronavirus outbreak, although there were doubts earlier today whether it would take place at all.

Hopefully those at the match stay healthy!