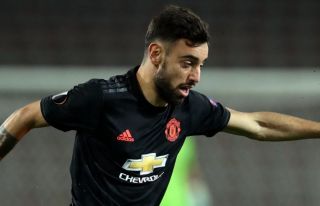 In the grasp of the Coronavirus and a slew of cancellations facing many of the world’s sporting leagues, Manchester United were one of six Europa League fixtures taking place on Thursday.

Despite everything and behind closed doors, United traveled to Austria to play LASK and came away with a 5-0 win. Goals were scored by Odion Ighalo, Daniel James, Juan Mata, Mason Greenwood and Andreas Pereira.

Here is how we ranked the United players:

Romero – 7 – Clean sheet and hardly broke a sweat during the match.

Williams – 7 – Wasn’t involved in many plays during the match. Pretty much locked down the LASK offense on his side.

Bailly – 7 – Looked good all match, it definitely wasn’t a game without chances in front of him, but he showed he is finding his form after being out for so long. He took a blow to his hip in the second half and went down on the pitch for a while but returned to the field at the next stoppage.

Maguire – 7 – Solid and almost had a goal in the first half after his header went wide.

Shaw – 6 – Picked up a quick yellow at the start of the second half so was a little hesitant at time to commit to the tackle.

Fred – 7 – Got into good positions throughout the match but was a little off-target on a shot or two. Earned an assist on a line splitting pass to Mata in the second half. Showed his growing confidence to play the ball forward.

McTominay –  6 – Wasn’t mentioned much during the match which is a good thing and bad thing.

Mata – 7 – Pretty non-existent all match until he capitalized on a wonderful pass from Fred in the second half to score a goal, his second in the competition. Other than that, it wasn’t the greatest display of form for Mata.

Fernandes – 9 – The reason for United’s unbeaten run. He was the catalyst to all the offensive moves during the match. He is never in a rush and has a great eye to find the open player on the run.

James – 8 – Playing on his wrong side so had a few shots off target on a few runs after he tried to switch to his dominate foot to shoot in the first half but made up for that in the 2nd half with a lovely goal after being set up perfectly from Ighalo and making a move to get in front of the net.

Ighalo – 9 – The LASK defense struggled all-match with his physical play and determination to get in front of the net. His goal in the first half was a thing of beauty and almost got another goal in the second but it just hit the far-side post.

Pereira – for Fernandes – Scored a seeing eye goal off a quick freekick from close to 35 yards out. Nobody expected that, including the LASK keeper. First ever away goal for Pereira

Greenwood– for Ighalo – Scored in the closing minutes of the match to pretty much seal United’s place in the next round. That makes in 12 goal in all competitions for him.